The small sign outside Bartolo Mascarello is barely visible along the age old wall it rests in. It is the original sign and it hints at the traditions preserved at the address. These walls are permeated with a rich history that spans generations, survived wars, fought against the political machine, and delivered an iconic winemaker to the world. It is also where Bartolo Mascarello crafted his Barolo from the finest expression of the terroir available and became the defender of the historic Barolo Crus. 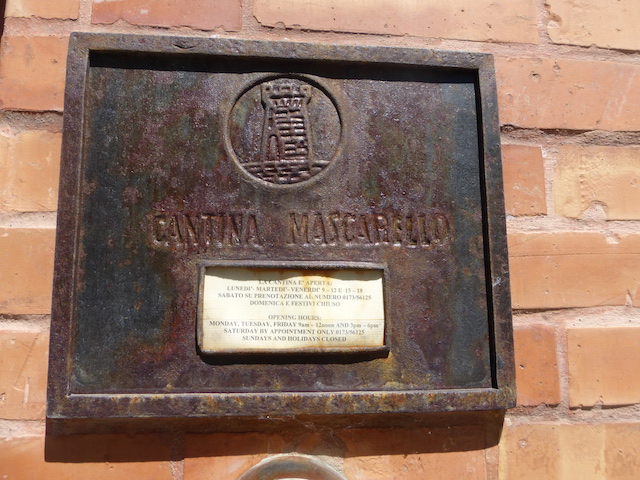 This family has been making wine since 1919. It started with Bartolomeo who worked as the cellar master for the Cantina de Sociale de Barolo until WWI forced the closure. After WWI only a few vinification houses existed. Bartolomeo’s son Giulio decided to found his own cellar and produce his own wine. Giulio went on to acquire land located in the original Barolo Crus. After WWII Bartolo joined his father Giulio in the winemaking business. Bartolo passed away in 2005 and his daughter Maria Teresa took over the winery.There are 2 other families of Mascarellos but they are not related to Bartolo Mascarello.

The current building was purchased in the 1940’s. Not much has changed inside since then. The cantina does not have internet or a website, and they don’t do any promotion of their wines. In the courtyard a 75 year old vine grows along the balcony and still yields white grapes.

Entering the small cellar is like stepping back in time. Maria Teresa still continues to make wine the way her father Bartolo did, using the same traditional methods. Mascarello produces Fresia, Dolcetto d’Alba, Barbera, and Barolo. There are 5 concrete tanks which were purchased in the 1940’s. These tanks have no temperature control so fermentation proceeds on it’s own accord. No yeast is added. There are no pumpovers but instead Capello Sommerso is utilized. Capello Sommerso is where the seeds and skins are held submerged in the fermenting wine. Maceration times vary depending on the varietal and the vintage.

The wine is pressed using an old basket press.

Controls of the old basket press

The brand of the traditional press

With regards to the Barolo, the grapes for this wine come from 4 vineyards: Rocche dell’ Annunziata, Cannubi, San Lorenzo, and Rue. Back in the 50’s, 60’s, and 70’s it was hard to achieve ripeness. Today they get ripeness almost every vintage. There is a 7-10 day difference between vineyard ripening. Rue is always picked last as it is the coolest spot. The grapes from the vineyards are divided amongst 4 tanks. All the grapes for the Barolo are fermented together in tank until fermentation is completed. The average maceration time for the Barolo is between 30-50 days but in 2010 the maceration lasted 56 days!  2010 was the longest maceration they have ever had.

All the wines go in to 25 year old traditional botte. Malolactic fermentation occurs in the wood. The cellar is not heated so malolactic fermentation doesn’t usually start until the following spring.  The botte range from 2500-5000 liters. They only use Slavonian oak botte but Maria Teresa states her grandfather did use some chestnut years ago. The Barbera ages for 2 years and the Barolo ages for 3 years.

Mascarello produces 5-6 botte a year of the Barolo of which all is a blend of the vineyards. They do not make single vineyard Barolo. There is no fining and no filtration of the wines except for the Dolcetto which receives a light filtration prior to bottling.  Maria Teresa states “I don’t want to make a perfect wine. I want to make a wine good for me which is an expression of the vintage”. She acknowledges that with the increased warmth these days there is a different evolution that happens in the bottle. Although she states nothing has changed in the way the wines are produced since her father’s days, one cannot help but notice there is a little more finesse in the most recent vintages. 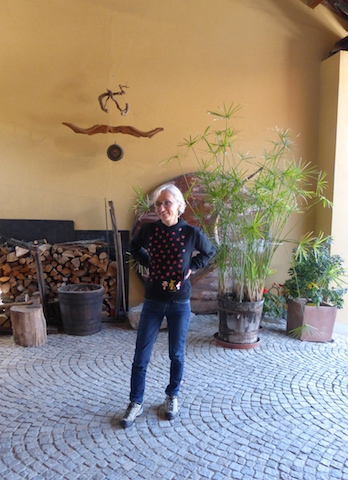 Total production at Bartolo Mascarello is approximately 30,000 bottles a year. Due to the high quality of these wines they are highly sought after and difficult to come by.  Half of the wine produced is sold at the cantina. Most of their wines go into the regular sized  750 ml bottles. They produce 200 Magnums a year and the USA receives 24 of these. The bottles are all labeled with special labels. Prior to 2008 they did all 30,000 labels by hand (half of this was Barolo).The labels were all made by Maria Teresa’s father Bartolo who was a painter. At 70 years old he started painting the labels as an expression of his ideas and feelings.

The most famous of these hand painted labels is pictured below. This label was created as Bartolo fought against the use of barriques for making Barolo and battled against those who sought to expand the traditional Cru vineyards of Barolo. He joined forces with Giuseppe Rinaldi and Teobaldo Cappellano to preserve traditional winemaking in Barolo and together the three became known as the “last of the Mohicans”. This label is the only label that is no longer used by Maria Teresa because she regards it as a symbol of her father and  all he stood for. The battle for traditional winemaking and to retain the boundaries set forth for the original Cru in Barolo continues today. Maria Teresa is part of this latest coalition. 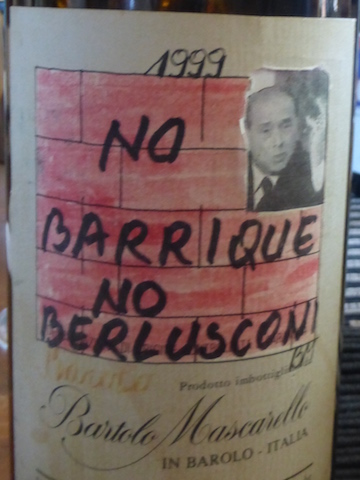 Finally I arrive in the depths of the cellar.The oldest bottle of wine on the premises is a 1929 Barolo which uses the traditional spelling of Canubbi.

From the cellar it was back upstairs to the “tasting room”. The room felt like home. It reminded me of being seated around the kitchen table with friends discussing life as you shared wine together. Imagine being seated at this table years ago with Bartolo! Below are the wines we tasted.

This wine is made only when they declassify the fruit. If the fruit is good then they will use it all for Barolo. In 2001 all the fruit went into the Barolo. In 2002 all the wine made was Nebbiolo Langhe.  It is a blend of the 4 vineyards. The maceration is 12-15 days. It spends 9 months in wood and then is bottled.

The 2012 Nebbiolo Langhe was bright and fresh. Aromas of strawberry, raspberry, forest berries, and cherries were present. The tannins were rounded and the wine was rated ready to drink. Cost of this bottle was E17.50.

Annual production of Dolcetto is 5000-6000 bottles a year. They only keep forty 375ml bottles a year for the tasting room so this was a real treat. The fruit usually all comes from Cannubi Bosci but in 2012 they had hail in the vineyard so 25% of the Dolcetto was from another source. The Dolcetto is the only wine produced by Bartolo Mascarello that gets a light filtration before bottling. The 2012 Dolcetto d’Alba was a very fresh vintage. It was round, soft, and juicy. For E8.70 it was a steal!

Grapes for this wine come from a single vineyard called San Lorenzo. In 2011 the months of August and September were as hot as 2003 which was the hottest vintage on record. It was a very good vintage for Barbera.  The wine spent 2 years in Slavonian oak. This Barbera is rich with red fruit and blackberry flavors. It will be best consumed in 3-6 years.

The Freesia is a very exclusive wine. Only 1,800 bottles were made in 2012. It is only sold in Italy with the exception a very small amount being exported to Japan. It is fermented in steel tanks and then goes through a light second fermentation in the bottle. They do not add sugar or yeast to the bottle. Their is 3-5g residual sugar after the first fermentation. This wine tastes like strawberry jam. Price was E12.50.

2009 was a warmer vintage. The grapes were harvested 10 days earlier than usual. Maceration lasted 35 days. Aromas of strawberry and sandalwood in the glass while flavors of sweet cherry, plum and prune were present. A fruit forward wine with silky tannins. Fantastic!

2010 was a fantastic vintage for Barolo. This wine was gorgeous! Aromas of dried rose petals, berries, spices, leather and balsamic. Intense flavors of red berries, cherry dominated with just a hint of white pepper. A very elegant, structured wine with firm tannins. This is a wine that will age gracefully for many years. Drink it after 2020.

1989 was a cool, long growing season. It was not an overly vigorous year and produced good grapes. The wine was an orange color in the glass. It had an intensely floral nose which also had aromas of orange rind, mushroom, leather, chocolate, teriyaki, and savory characteristics. A meaty wine spiked with red fruit and earth tones. The tannins were well integrated and it still had some grip to it which indicated it hadn’t peaked yet. An incredibly delicious wine with a very lengthy finish.

The 1989 Barolo was a thought pondering, reflective wine. Time stood still. Gazing into the glass I wondered about what it was like all those years ago to make this wine. 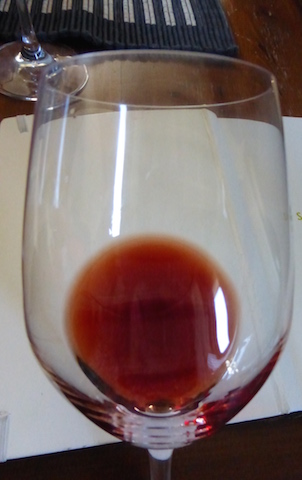 As the last taste of the 1989 Barolo lingered I contemplated the history of this cantina. Bartolo Mascarello, defender of the Barolo Cru and opponent to modern winemaking techniques has left behind a legacy in the wines he created, and with the skills he taught his daughter Marie Teresa. In time these old walls will add another layer of history to the foundation at Bartolo Mascarello Cantina.