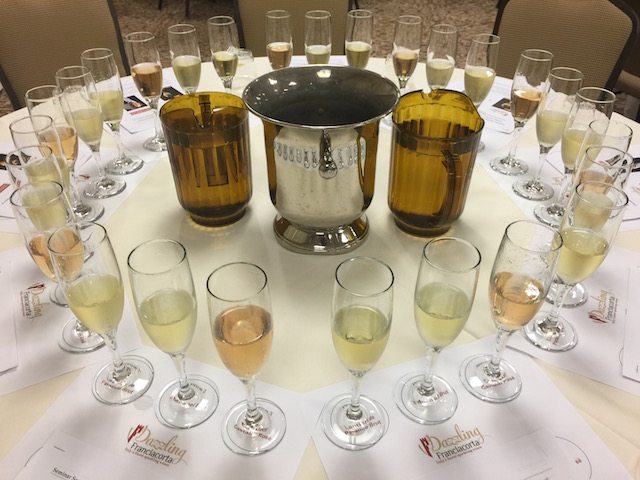 First let’s give you a little background information on Franciacorta. It’s a small wine producing region in the province of Lombardy which is located in northern Italy. Brescia is a province of Lombardy, and along with Lake d’Iseo it forms the boundaries for the region designated Franciacorta. The region is very picturesque with rolling hills, rivers, lakes, and a few castles and churches. The fashion capital of Milan is located 80 km away within the Lombardy province.

EXCELLENCE IS ACHIEVED ONLY WITH THE UTMOST PASSION (Goethe)

In 1967 Franciacorta was awarded DOCG status which is the highest level for quality wines in Italy. Wines from Franciacorta are one of the few DOCG that do not have to place DOCG on their label. It is the only DOCG that requires all wines must be made metado classico, and bottle aged on the lees. Non-vintage wines must be on the lees for 18 months, rose and saten require 24 months aging, and vintage-marked millesimato must spend 30 months. Riserva wines require 60 months aging on the lees. All vintage dated wines must contain minimum 85% grapes from the vintage specified. Chardonnay, Pinot Bianco (Pinot Blanc) and Pinot Nero (Pinot Noir) are the grapes used for production of Franciacorta wines.  One other term specific to the region is Saten which is the same as a Blanc de Blancs from Champagne (made from 100% Chardonnay). I find that the wines from Franciacorta are always a bit richer than the wines from Champagne due to the fact that Franciacorta is a warmer region.

Lantieri de Paratico
Lantieri de Paratico is the only winemaking family in Franciacorta to have a history that goes back over a millennium. Total wine production is roughly 120,000 bottles per year. This NV Brut makes up the majority of their sales with 80,000 bottles being produced. The blend is 90% Chardonnay and 10% Pinot Bianco. It was aged 24 months on the lees. It’s a lovely light gold color. It tastes of ripe golden apples and has good acidity. It paired well with the Shigoku oysters with olive oil and fresh wasabi

Il Mosnel
This winery was established in 1836 under the name of Barzano Barboglio. Emanuela Barboglio was one of the pioneers of Franciacorta. In 1976 the name was changed to Il Mosnel which is a Celt word that means stony place. Today the company produces 250,000 bottles annually of which only 10% is exported. They produce seven Franciacorta wines. 130,000 bottles of the NV Brut were made. It’s a blend of 60% Chardonnay, 30% Pinot Bianco and 10% Pinot Nero. The wine spends 18 months on the lees and 70% of this wine sees some barrel aging. In the glass it’s a pale yellow color with delicate bubbles rising to the top in a steady stream. It’s crisp, rich, and one can really taste the toast flavor. The spearfish crude with finger limes and alleppo peppers went well with this wine.

Contadi Castaldi
Contadi Castaldi is a relatively new producer in Franciacorta having been established in 1987 by the Moretti family. The name of the winery comes from its history as contadi refers to the plots into which the land was divided, and castaldi were the officers who managed the goods for the Prince back in the Lombard time. Today Contadi Castaldi produces 900,000 bottles a year. 100,000 bottles of the Rose were made. The blend is 65% Chardonnay and 35% Pinot Nero. It’s a gorgeous pale salmon color with aromas of rose petals, wild strawberries, and apples. The wine spent 24 months on the lees which gives it a rich texture on the palate. Pairing for this wine was Dungeness crab with Granny Smith apples and Pistachio nuts.

Majolini
Majolini was established in 1981 . The name comes from Maiolina which is the name of an ancient grape that only grows in Ome in the Brescia province. The grape was given it’s name by the Maiolini (Majolini) family. I love the label on this bottle of 2006 Franciacorta. The picture on the label is of a sculpture called Horses in Love. It was created by Aligi Sassu in the years of 1999-2000 especially for his friend Majolini to have at the winery. It was Aligi’s last work of art before he passed away in 2000.

The 2006 Pas Dose is made of 100% Chardonnay. No dosage was added. It was aged 36 months on the lees. I love the nose of flowers, citrus, golden apple, and baked bread. It’s a very rich wine with a lovely, long and creamy finish.  Only 6,ooo bottles were produced so I’m feeling rather fortunate to be tasting this wine. It was paired with a Chanterelle mushroom and cauliflower pasada.

Ferghettina
In 1992 Roberto Gatti decided to branch out on his own after working for almost 20 years in the winemaking business in Franciacorta. Roberto established Ferghettina which now produces roughly 350,000 bottles a year. The property is located along Lake Sebino and has a new cellar, and guesthouse. The 2010 Saten is made from 100% Chardonnay. It has wonderful aromas of Golden Delicious apples, pear and pastry. It sees some barrel aging and spends 36 months on the lees which results in a wine that is intensely creamy and elegant. I really enjoyed this wine. Air dried country ham in a freshly baked biscuit was paired with this wine but the biscuit completely overpowered the delicate nature of the wine.

Fratelli Berlucchi
Antonio Berlucchi established this winery in 1967. After Antonio passed away the winery was passed down to his 5 sons who continue to run it today.  Fratelli Berlucchi owns 70 hectares of land in the heart of Franciacorta. They produce 400,000 bottles annually.

The Fratelli Berlucchi Rose 2010 is made from 40% Chardonnay and 60% Pinot Nero. It sees some barrel aging and spends 30 months on the lees. On the nose were aromas of cherry, raspberry and ripe strawberry and baked bread. It’s a rich sparkling wine that paired well with the perigord truffle butter gnocchi. 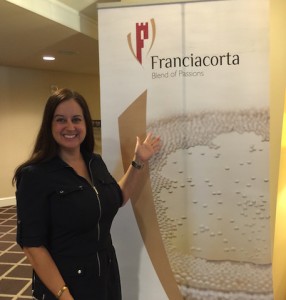 These six wines provided a wide range of wine styles which were all of the highest quality in sparkling wine. Franciacorta deserves the title of Italy’s Best Sparkling wine.