I love to try new types of food and occasionally I even attempt to cook them. The Geoduck is considered a Pacific Northwest delicacy and it is prized by those who live in Hong Kong and China. Given I live in Seattle (which is where Geoduck makes it’s home), it was only natural that I venture into what I’ll term phallic dining.

So what is a Geoduck?
First of all it is pronounced Gooey Duck. The name comes from the Nisqually Indian tribe and it refers to shape of the clam (genitals) and the fact it likes to dig deep. It is also known by the names elephant clam, king clam, mirugai, and mud duck. Geoduck is a saltwater, burrowing clam that makes it’s home on the West Coast of North America, especially in Washington state and British Columbia, Canada.

The title of largest burrowing clam in the world is bestowed on the Geoduck. The average weight is about 2 lbs but they have documented Geoduck weighing up to 15 lbs. The siphon (the part that sticks out from the clam) can grow up to 3 feet in length as they burrow into the sand. Crazy as it sounds Geoduck is actually classified as an animal species. They can live a really long time with the average age being 140 years old.

My 2 specimens each weighed about 3 lbs. I received them from North American Natural Seafood Inc which is a company that specializes in exporting live Geoduck to China. Mr Lin explained to me that he only exports Geoduck and that it is an 80 million dollar industry in the United States. Geoduck sell for a much higher market value if they are alive. In China the price can reach over $150 USD a pound. If geoduck is served at a business meeting in China, it is seen as a mark of status.

The siphon of the Geoduck is regarded as an aphrodisiac due to its phallic shape. It’s apparently rich in amino acids that prompt an increase in levels of sex hormones. Sounds like a case for naturally occurring Viagra to me. Testosterone levels rise due to the high levels of zinc acids. If you are a man this is perfect but don’t fret if you are a woman. Aside from the belief in the sexual benefits of eating Geoduck the main reason people eat it is because it has a crunchy, salty flavor. It can be prepared a number of ways but is most common as sashimi. It’s popular in soups, fondue, stirfry, stews, and fried.

So how did I prepare my Geoduck?
Well, first I put it in a saltwater bath and rubbed it to clean it. Then I boiled it for 30 seconds to help release the shell. I took the clam out of the boiling water and plunged it into an ice water bath. 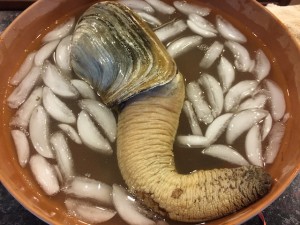 This made it easy to release the skin covering the siphon. The skin looked like a condom and I quickly disposed of that. I cut the shell off, pulled the stomach out and discarded it (some people eat this part too). So now I had  an organism that looked like this.

Next I rubbed the end of the siphon with sea salt to take off the dark color. It was then rinsed in water. 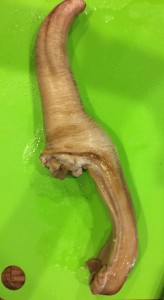 I sliced open the siphon to clean it and then again rinsed with water. 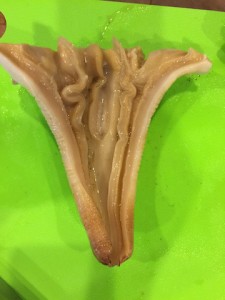 The siphon portion was used to make the sashimi. I sliced it paper thin. I chose to eat it dipped in soy sauce and wasabi. You can also make it Carpaccio style by squeezing a lemon over the Geoduck and then drizzling it with olive oil. 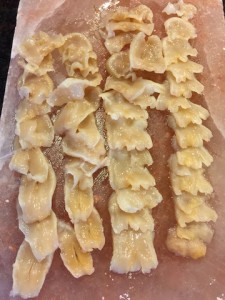 The belly meat was cut up, rolled in panko crumbs, and fried. The belly of the geoduck makes amazing fritters because it is so tender. They melted in your mouth. 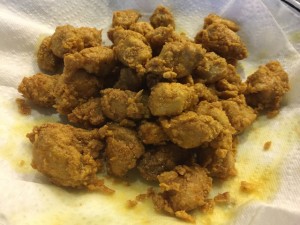 The geoduck paired well with a Columbia Valley white wine from Coral Wines. This wine was made from a blend of three Rhone varieties: Marsanne, Viognier, and Grenache Blanc. The nose had scents of citrus and Golden Delicious apples. The palate tasted of fresh yellow apples, citrus and hints of spice. This rich, full bodied wine beautifully complemented both preparations of the geoduck. 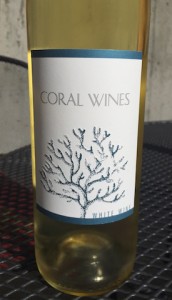 So needless to say that the conversation while prepping the Geoduck was rather x-rated and produced a great deal of laughter as each step was completed. In the end the Geoduck was gobbled up in minutes and everyone agreed that it was delicious. I’ve never eaten such a unique organism or had a dinner conversation quite like this one. Geoduck definitely was a phallic feast.