Italian history buffs and romantics need look no further than Marchesi Di Barolo for a great story. What woman can’t resist a love story between an Italian nobleman and a French noblewoman which includes a castle in the gorgeous Italian countryside. Throw in vineyards, and great wines and you’ve got a bestselling novel in my opinion.

Back in 1807 the Marquis of Barolo married a French noblewoman named Juliette who was a descendent of King Louis XIV. They took up residence in the Castle of the Marquis Falletti which overlooked the town of Barolo. Juliette realized the potential of the vineyards surrounding their estate and created wine cellars to make it possible for winemaking and aging of the wines to occur. As per French tradition the wine was named after the town it was originally produced in. Unfortunately the Falletti line ended in 1864  but the memory and winemaking of the family was carried on by an organization called the Opera Pia Barolo.

During the same time the Abbona family owned cellars next to the Castle of Falletti. Eventually Pietro Abbona and his family were able to acquire the Opera Pia Barolo and the Marchesi Di Barolo Estate. The Abbona family has owned the estate for  5 generations and is currently headed by Ernesto and Anna Abbona. Today the family manages about 270 acres of vineyards in the Langhe region of Piedmont. Marchesi Di Barolo owns 110 acres of which 60 acres are in the commune of Barolo. The family produces wines made from Nebbiolo, Barbera, Dolcetto, Grignolino, Freisa, Braquetto d’aqui, Arneis, Cortese, and Moscato. 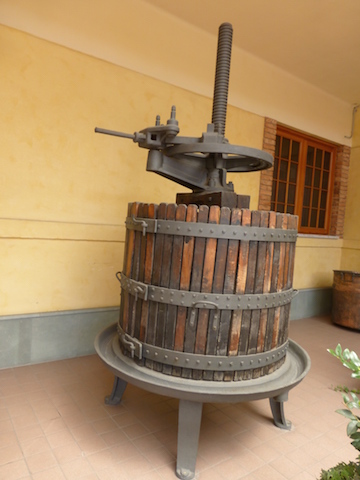 Old Basket Press
(no longer in use)

Marchesi Di Barolo has 10 of the large Slavonian oak barrels pictured above. The barrels are from the 1950’s. Each barrel holds 18,500 liters of wine and makes approximately 25,000 bottles. 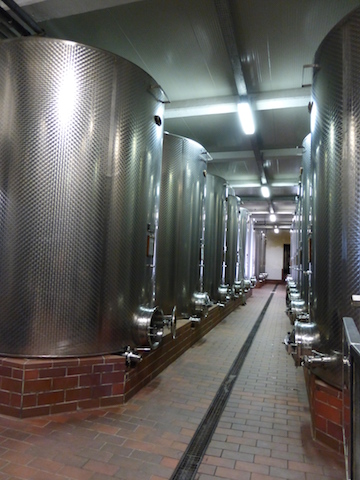 The Moscato is stored in stainless steel tanks and bottled when needed. There is a system of underground tubes that runs about 900 meters that the Moscato runs through to the facility where it is bottled at. 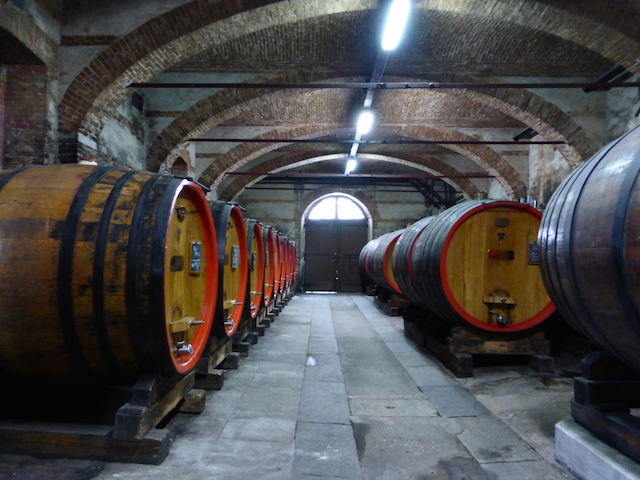 The old section of the cellar was built in the 1840’s. 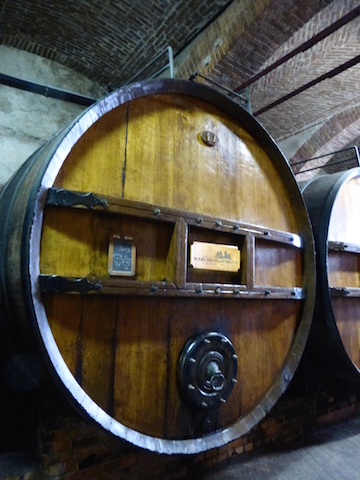 An old barrel made from French oak in the 1840’s. They were restored in 2003. There are 5 of these barrels which are still used today. Each barrel holds 12,500 liters. 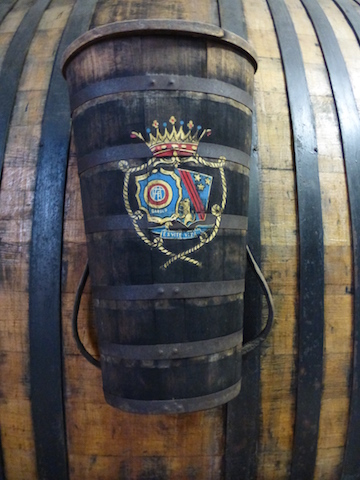 This is an old picking basket called a brenta. It was also used as a unit of measure. 53 baskets filled one 3000 liter barrel. It is reinforced with iron and is very heavy….weighing about 15 kg.

Barriques are only used for the Cru wines of Cannubi and Sarmassa. The estate produces these 2 single-vineyard crus from 100% estate grown Nebbiolo grapes.

Down in the cellar is a historical book noting who received some of the first wines produced. Marchesi Di Barolo stores a library of 36,000 bottles of OLD vintages. There are 2 cellars. One holds wines from 1938-1967. The second cellar holds vintages 1967-2008. There are a few very old bottles dating back to 1859. The bottle dated 1907 shows the old label which was used until the 1960’s.

After the cellar tour it was time to walk about the rest of the winery. Palm trees on the property were not native but planted to give ambience. There were some beautiful views from the veranda.

Finally it was back to the tasting room to sip a little Barolo Grappa and Moscato Grappa. The tasting room joins the wine shop which contains wines and all kinds of wine related items. 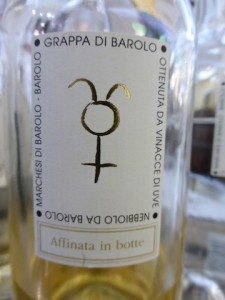 Marchesi di Barolo is a historical winery not to be missed when visiting Barolo.