The 19th edition of NEBBIOLO PRIMA was held May 11-16th in Alba, Italy. The annual event is hosted by ALBESIA and is designed to feature the latest vintages of Barolo, Barbaresco, and Roero to the press. Ninety journalists from 25 countries attended. I was an invited guest of Gheusis which is the organization responsible for the promotion of the event. Nebbiolo Prima presented a multitude of wines from over 200 producers. The event clearly earned the title “Italian Wine Summit par Excellence”  which had been bestowed by my colleagues who had attended in previous years. 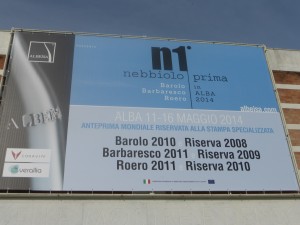 Guests were greeted on Sunday evening with a welcome from Alberto Cordero de Montezemolo, the President of Albesia. Afterwards in the Piazza an informal tasting featured the sparkling and white wines from Langhe and Roero producers which were served with a light buffet.

The truffle fries were so addictive!

It was an impressive showing of the many styles of sparkling wines.  The quality of the wines was outstanding. The region is not known to most consumers as a center for sparkling wine production. One example of a fantastic sparkling wine was made by Marziano Abbona. It was crisp, refreshing, and had delicate bubbles. 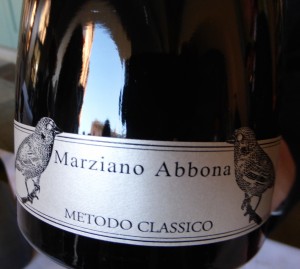 Monday morning saw the start of Nebbiolo Prima at 8:30 a.m.  at the Palazzo Mostre e Congressi.  There were two program options for tasting wines over the next couple days. The intensive program required one to taste around 400 wines while the soft program offered a total of 250 wines. The wines were  arranged by DOCG denominations. All wines would be tasted blind. Participants were given a tasting sheet that provided only the DOCG, commune, and vintage. Flights of 5 wines were delivered in each round.

Bottles ready for the blind tasting.

There were 57 wines to be tasted on Monday morning. The wines were from the Barolo DOCG 2010 (Cherasco,Grinzane,Novello, Roddi, Verduno) and Barbaresco DOCG 2011 (from Alba).  It was interesting to glance around the room to observe how each individual writer tackled the task of tasting.  Some writers had very detailed spreadsheets in their laptops, others had notebooks, and still others appeared to take no notes at all except to star a few wines on the tasting key. Tasting for the soft program was held until early afternoon while those on the intense program continued on until 4 pm. Once an individual had completed their tasting for the day they were handed a document which revealed the names of the producers. Bottles that really stood out were E.Pira’s Via Nuova and Cantina Terre Del Barolo’s Vinum Vita Est from Piu Comuni, Franco Conterno’s Panerole from Novello, and Grimaldi Bruna’s Bricco Ambrogio from Roddi. 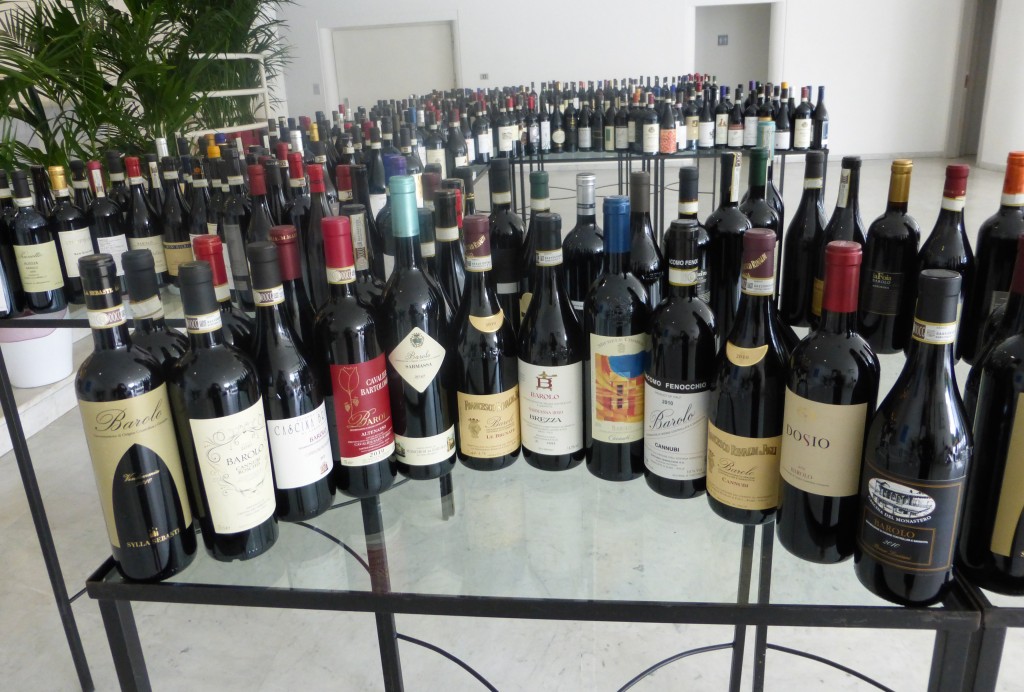 For those on the soft program the afternoon was free to attend a tasting, and to meet the wine producers. This tasting was to feature the  2004 Barolo, Barbaresco, and Roero. After the tasting participants dined at restaurants and Trattorie in the Langhe. The dinners featured a chance to experience the food from the region in a pairing with wines selected by the winemaker in attendance.

Day 2 of Nebbiolo Prima started early with a tasting of 56 wines. These wines were considerably more tannic than the previous morning. The wines were from Barolo DOCG 2010 (Castiglione Falletto, Monforte d’Alba, and Serralunga d’Alba). Tasting of these wines was not for the faint of heart as the tannins were extremely grippy and the wines displayed pronounced acidity as would be expected in these young Nebbiolo wines. I settled in to pace myself for the tannin marathon like a seasoned wine athlete. Despite my preparation for the event I must admit my teeth hurt by noon. Thank goodness for the soft program option. The standout wine tasted today was Paolo Scavino’s Bric Del Fiasco.  The afternoon was spent meeting with 2 wine producers at their respective wineries. Dinner with fellow journalists at a local restaurant was a good time to discuss the wines tasted earlier and see which wines made an individuals “favorites” list.

Day 3 of Nebbiolo Prima featured 48 wines from Barolo DOCG 2010 (Barolo and La Morra). The tannin marathon continued. The wines featured today were more bold and showed a heavier use of oak. They were also more aromatic and had more floral characteristics. The overall quality of these wines was so high that it was hard to pick out a couple producers that stood out above the rest. The Brezza Giacomo from Sarmassa,  Barale Fratelli from Castellero, Casino Bruciata from Cannubo Muscatel, the wines of Silvio Grasso, and most wines from Cannubi Boschis were extremely noteworthy. Visits to wineries and vineyards was an option for the afternoon. Dinner was hosted by individual winemakers at local restaurants.

Nebbiolo Prima was an excellent opportunity to experience the 2010 vintage. Being able to compare so many wines from Nebbiolo side by side from specific communes was superb. I had never heard of many of the small producers whose wines left favorable impressions on me. Traditional style and modern style wines both showed well. As one would expect there were exceptions to the overall impression of the vintage. The 2010 vintage shows wines with opulent fruit, power, and structure that ensures they will age extremely well over the next decade plus. It is a excellent vintage! Wine enthusiasts and collectors will want to stock up on these wines. Through Nebbiolo Prima 2014, Albesia has managed to showcase the winemakers of the Langhe region.