Piedmont is one of the 20 regions in Italy. Located in northwest Italy it is the second largest of the Italian regions. The area borders Switzerland and France and is surrounded by mountains on three sides. The name Piedmont literally means foot of the mountains. The landscape of the region is very picturesque with the Alps in the background. Aside from the spectacular scenery the region also boasts some of the world’s best wine growing regions and is a food lovers paradise.

Getting to Piedmont from abroad requires that you fly into either Turin (Torino) or Milan. Turin Caselle Airport (TRN) was my choice. From here it was easy to get a train to Alba which was to be my home base to explore the wine growing regions. 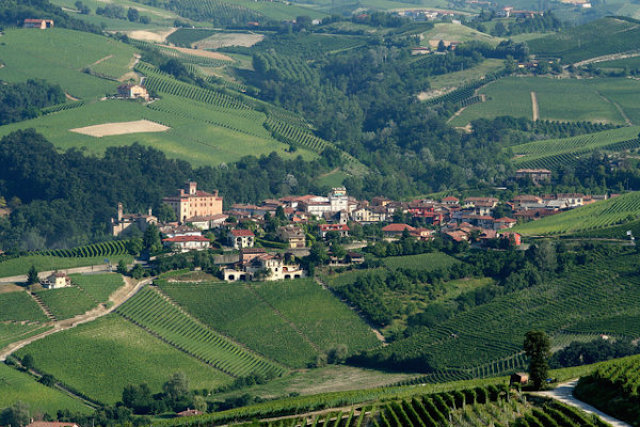 Piedmont is probably the most hilly wine region in Italy. The area has the most DOC and DOCG wines of any wine growing region in Italy. There are 45 DOC wines and 15 DOCG wines. There are a range of wine styles so there is something for everyone to enjoy. Many of the native grapes are very site specific and do not flourish in other parts of the world. The type of grape cultivated will determine whether the vines are planted on the top, middle or lower part of the hillsides. The most prized grapes are planted on the middle hillsides which are considered the best site due to receiving optimal warmth and sunlight.

Piedmont produces approximately 65% red wines and 35% white wines in both still and sparkling styles. Grapes grown include Nebbiolo, Barbera, Dolcetto, Ruche, Fresia, Bonarda Piemontese, Brachetto, Grignolino, Quagliano, Pelaverga, Cortese, Croatina, Timorasso, Arneis, Erbaluce, Malvasia, Vespolina, and Muscat Blanc a Petits Grains. The most famous of the wines produced is Barolo which is often called the King of Italian wine. Barbaresco is the second most recognized red wine and is known as the Queen. Barbera and Dolcetto are the next best known red wines. For still white wines Arneis and Gavi are the most popular. The region of Asti produces great sparkling wines.

To explore the regions where many of the grapes are grown Alba provides a perfect base. The town is in the Cuneo province and is the capital of the Langhe region. The Tanaro River runs through this old Roman city. Attractions include the Cathedral di San Lorenzo, Palazzo Communale, museums, Centero Storico (street market) and numerous Michelin starred restaurants. Alba is home to the Ferrero chocolate factories and Nutella. The White truffle festival is held in the fall. Accommodations at the Hotel Calissano and the I Castelli Hotel were both within easy walking distance to all the shops and restaurants downtown.

Piedmont as a travel destination offers beautiful scenery, fantastic food experiences, and world class wines. Photographers, winelovers and foodies will delight at the many opportunities to explore this exceptional region in Italy.