Sansei Seafood Restaurant and Sushi Bar in Seattle finally opened it’s doors on Feb 20th, 2016 for the grand opening gala. Sansei is a collaboration between Dave (DK) Kodoma and Chuck Furuya. The restaurant is best known in Hawaii and this is the 5th location to open, the first one on  “the mainland”. The grand opening was an opportunity to see how the Hawaiian chain fared in the Pacific Northwest region.

Sansei means “third generation” and this is a tribute to DK Kodoma’s heritage as he is a third generation Japanese American. He originally intended to be an engineer but found his calling when he moved to Seattle back in 1979 to have a break from his studies. DK worked as a bartender in Seattle before moving on to Aspen, Colorado where he would hone his bartending and cooking skills for the next ten years. In 1995 DK opened his first restaurant in Hawaii and he never looked back. Today DK has 6 Sansei restaurants and 2 other restaurants in Hawaii.

Chuck Furuya is Hawaii’s only Master Sommelier. He passed the rigorous examination back in 1988 and thus became the tenth Master Sommelier in the United States. Chuck’s passion for educating others about the intricacies of wine enabled him to become the Chairman of Education for the Court of Master Sommeliers. He moved on from that appointment to pursue his dream of creating a place where exceptional quality dining could be achieved at reasonable prices. He first collaborated with DK Kodoma in 2003 and the pair opened Vino in Maui at the Kapalua Resort. They went on to open a second location together in Honolulu. Today Chuck is the wine director for all of DK Kodoma’s restaurants. 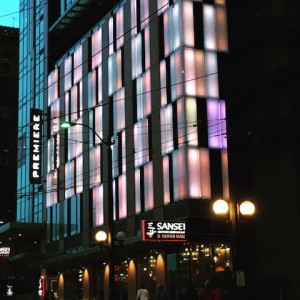 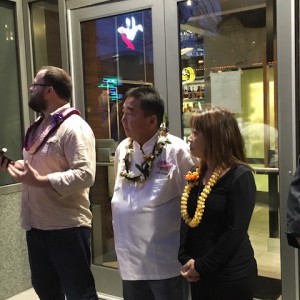 DK brought a number of his staff from the other Sansei locations to assist at the grand opening. Some of these individuals will now be permanently based at the Seattle location. The bar area in the restaurant is very upscale and will feature a wide range of  libations including their own special cocktails. 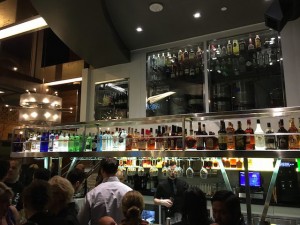 DK made sure to greet each guest. 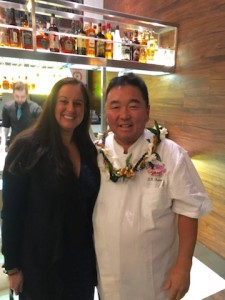 The sushi bar was in full swing churning out a variety of nigiri and sushi rolls. The fish was of the highest quality. 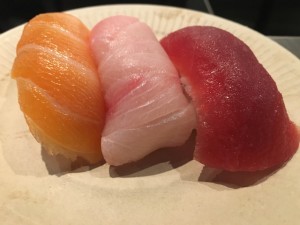 Favorites such as california rolls, shrimp tempura rolls, and spicy tuna rolls were featured. There were also many unique and creative rolls such as the panko crusted fresh ahi roll which was fresh ahi wrapped with spinach and arugula, panko crusted, and then flash fried before being served in a bed of soy wasabi butter sauce. OMG! It was scrumptious! 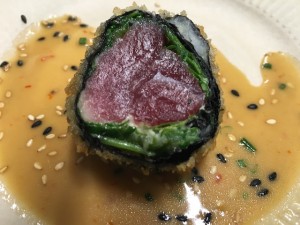 One of the specialties at Sansei is the Crab Ramen with Asian Truffle Broth. This is made with crab, cilantro, thai basil, and mild jalepenos. At the grand opening mini bowls waited for the broth to be scooped over it. It was impossible not to have a second bowl! 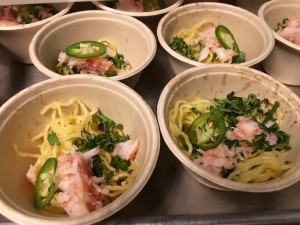 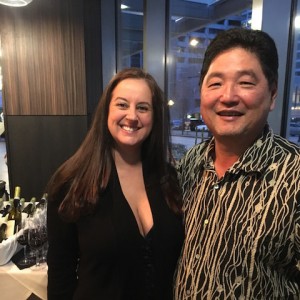 The wine the night was a lovely Italian white wine. Pieropan is one of my everyday favorites and it’s also a Tre Bicchieri winner (the highest award in Italian wines).   It’s a fantastic Soave made from Garganega grapes. So crisp and refreshing! It paired well with the many styles of seafood served at the event. 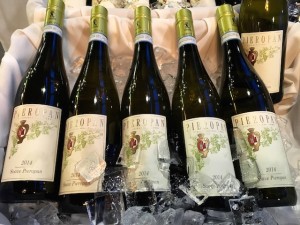 Matsuhisa style Butterfish just melted in your mouth. This is butterfish that has been marinated and roasted in sake and sweet miso. It was cooked perfectly. 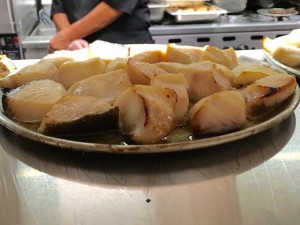 Lobster and crab ravioli is sure to be a menu hit. So much flavor in this dish which includes Shitake mushrooms. Who knew the Japanese and Hawaiian’s could put an entirely new twist on Italian cuisine. Delicious! 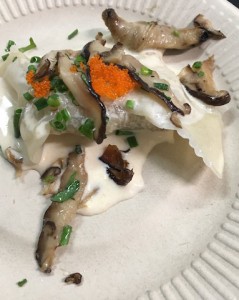 Tempura is one item that easily separates the amateurs from the professionals. DK’s tempura is outstanding. It’s light, and crispy with a delicate texture. The tempura vegetables and shrimp were superb. The tempura can be served on it’s own or put into various sushi rolls. 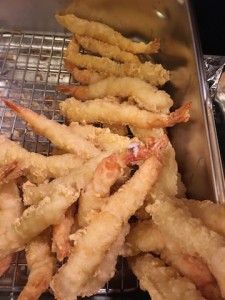 The Hawaiian influence was most noted in the flower arrangements.

Symbols of Good Luck and Good Fortune were also present. 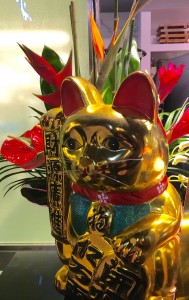 Sansei’s first restaurant on the “mainland” is sure to do well. The creative and unique dishes featured on their menu will have Seattle diners lining up to get a taste of the Hawaiian Islands with a Pacific Northwest twist. Congratulations to DK Kodoma and Chuck Furuya on their latest endeavor at Sansei Seattle.