Once upon a time Worldly Wino went to Walla Walla and and happened upon the Saviah Cellars Cabernet Franc 2009. It was love at first sip! Cases of this gem were immediately transported back to Seattle and thus was the start of a beautiful relationship. 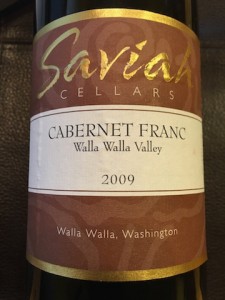 Walla Walla Valley in Washington State has the perfect climate for growing world class grapes. Cabernet Franc can be found throughout the Walla Walla Valley but most of the time it fails to reach optimal ripeness in my honest opinion. Cabernet Franc ripens later than Cabernet Sauvignon. It’s usually used as a blending grape in Bordeaux style blends. Very few producers will make a wine based solely on Cabernet Franc. Richard Funk of Saviah Cellars is one of the few  who would even attempt the challenge and in this vintage he absolutely “struck gold”.

Richard (Rich) Funk is one of the nicest people you will ever meet. He and his wife Anita founded Saviah Cellars in the year 2000. Rich is a self taught winemaker whose first wine release consisted of 300 cases of varying blends. He’s come a long way since then. Saviah Cellars currently produces 18,000 cases of wine. He’s one of Washington’s Rising Stars and has a true Cinderella story.  I really admire his tenacity, knowledge, and passion for wine.

So back to the Saviah Cellars Cabernet Franc 2009. Only 192 cases were produced. I scooped 2 of them at the release date and managed to secure more from the winery during the rest of that year. As an individual who adores 100% Cabernet Franc wines (when ripeness is achieved),  I must say this is one of the best examples of Cabernet Franc I’ve ever encountered. Fruit for this wine was sourced from Watermill Vineyard and Seven Hills Vineyard in the Walla Walla Valley. Fermentation was completed in small stainless steel tanks with hand punchdowns of the cap 3 times a day. Following a gentle press the wine was transferred to small oak barrels.  The wine was aged 21 months in oak, of which 40% was new French oak. Alcohol came in at 14.2%.

The Saviah Cellars Cabernet Franc 2009 is a dark ruby color with generous aromas of raspberry, ripe red cherry, black cherry,and vanilla bean up front. The nose also has a dustiness to it with savory herbs, cocoa, and slight tobacco leaf noted. On the palate it’s a rich, full bodied, balanced wine with a plush velvet texture. Fruit aromas are mirrored on the palate with the minerality highlighted. The finish is long and juicy. Over the years I’ve paired this wine with many meat based dishes and chocolate desserts as it’s incredibly food friendly.

Be sure to check out wines from Saviah Cellars .They have a solid portfolio with wines available at 3 tiers: Classic, Estate, and Reserve. Some wines are extremely limited so don’t hesitate to grab them while you can.