Unearthing the Nectar of Nizza

Nizza Monferrato is a small town located approximately 37 miles southeast of Turin and 12 miles southeast of Asti in the Monferrato hills in Piedmont, Italy. It’s a quaint little town that is famous for Barbera d’Asti Superiore Nizza, Cardo Gobbo (a winter vegetable and hunchback cartoon), and La belecauda (chickpea flour cooked in a wood oven). As of September 1st, 2014 they are now known for becoming Italy’s 74th DOCG (Denominazione di Origine Controllata e Garantita)  and first DOCG to be granted under the European Union (EU). 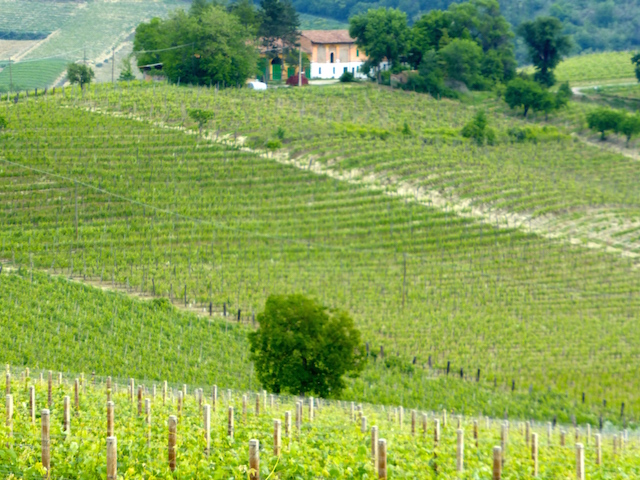 The Associazone Produttori del Nizza whose goals are the protection, enhancement, and promotion of the excellence of the appellation Nizza was formed in 2002. Current president Gianluca Morino states “one of the goals was to simplify the name so that it would be an easily recognizable household name like pizza”. So they took the name from Barbera d’Asti Superiore Nizza and shortened it to NIZZA to eliminate the numerous types of Barbera but yet highlight the BEST Barbera. Nizza is a short, concise name that immediately identifies the area as opposed to ” Barbera d’Asti”. Of the 33,000 hectares of Barbera in the world 30,000 are located in Nizza.

There are 40 producers who are members of the Associazione Produttori del Nizza. There are also 8 other producers  who are not members in the association. This brings the total number of producers to 48. The association holds  regular blind group tastings with all the producers. Each producer receives a letter stating the comments of what the other producers thought of their wines. This in turn raises the quality of all the wines. Criteria for the new Nizza DOCG were formulated and a proposal was submitted to the Conzorzio Tutela Vini d’Asti e del Monferrato that governs the wine sector of the Monferrato area to establish a new DOCG. On September 1st, 2014 the DOCG status was granted. The 2014 harvest will be the first to be labeled as Nizza. So what does all this mean?

Nizza is the combined product of the land, climate and the grape variety.  Wines must meet a strict set of rules in order to be called Nizza. The wines must come from one of only 18 communes rather than the 160 for Asti. It’s a region comprising 220 acres. 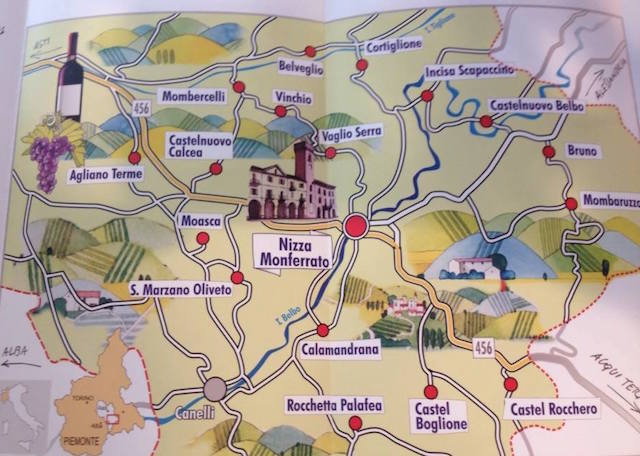 The vineyard sites must have southern exposure (called sori in Piedmont). Sori are required because Barbera vines need warmth and sunlight to achieve optimum ripeness. The maximum vineyard altitude is 650 meters with minimum plants/ha of  4000. Traditional growing system called controspalliera (a guyot method of pruning with limit of 10 buds per vine stock) or spurred cordon are mandatory. Vines are trellised low to the ground to capture the warmth retained in the soils. A combination of sand and various marls comprises the soil. In the spring these vineyards see 2 months of constant wind. The wind comes from Liguria. Rainfall averages 700-740 mm rain per year.  Production yield is 49 hectoliters per hectare. Barbera vines bear medium sized bunches of grapes which are thin skinned and ripen late. All grapes must be hand harvested.

Ground cover between the vines

Strawberry plants are part of the ground cover. These vineyards are sustainable and organic.

These are the formation of what will become the grapes

All wines labeled as Nizza must be made from 100% Barbera grapes. Due to the thin skinned nature of the grape the maceration usually lasts only 10-12 days. The alcohol  must be 13%. If the vineyard is indicated on the label then the wine must contain an alcohol content of 13.5%. Addition of MCR (mout concentrate rectitifie) or rectified grape must is banned. Nizza is the first DOCG in Italy to regulate the use of grape must. Nizza DOCG must age a minimum of 18 months total with six of those months in barrel. Nizza Riserva DOCG requires the wine to be aged a total of 30 months of which 12 months must be in barrel. The aging requirements for Nizza differ substantially from those required by Barbera d’Asti DOCG (4 months total ageing, no barrel required), and Barbera d’Asti DOCG Superiore (14 months total with 6 in barrel). The rules for the DOCG ensure Barbera from only the finest years is utilized. If the wines do not reach the higher alcohol level then they can still labeled as Barbera d’Asti, Barbera del Monferrato Superiore DOCG, Barbera del Monferato DOC or Piedmonte DOC. 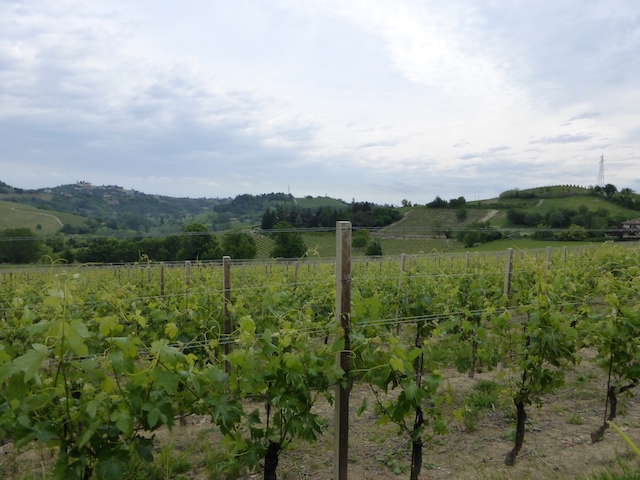 Nizza wines are a deep ruby color. Fruity aromas of cherries, plums, dark berries, spices, balsamic and  floral notes make up the bouquet. The wines are fresh and have a biting acidity when young. These dry, full bodied wines have low tannins. With barrel aging the wine develops overtones of cinnamon, cocoa powder, and licorice. They pair well with antipasti, charcuterie, and medium aged cheeses.

The area of Nizza is relatively unknown outside of Italy. To combat this producers in the association have decided to market their wines as a group to allow the consumers to  recognize Nizza more easily. It’s a tight knit group because many of the producers attended school together. All the producers share the same vision of producing top quality wine.

Promotional efforts are closely tied to restaurants because they are the main consumers of Nizza with 50% of the wine being consumed in Piedmont. Local dishes pair very well with wines made from Barbera. Below are some of the Nizza wine producers and their featured wines.

Nizza strongly distinguishes the link between Barbera and the terroir where it is grown. These incredibly food friendly wines are a great way to experience the traditions, history and culture of the region.