Vino 2015 took place February 1-5, 2015 at the Walforf Astoria in New York city. This event this year focused on the South of Italy but featured wines from all Italy’s wine regions. It was a jam packed program that featured seminars, guided tastings, master classes and new product introductions. 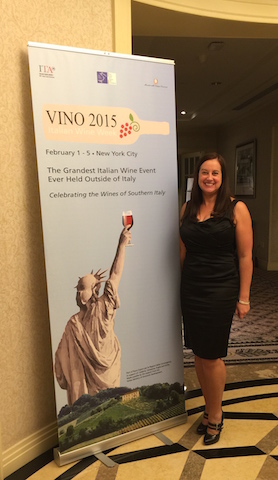 My program began with a seminar on Sicily. Master of Wine Bill Nesto took us through this unique region. We explored wine traditions, terroir, and the unique wine varieties. There is so much more to Sicily than Nero d’Avola. The thing all the wines had in common was high acidity and intense minerality. No surprise there when you have volcanic soil everywhere. Who knew that vines could grow in lava? There is so much lava on Etna that they use the excess to build the walls of the terraces.

After Sicily it was time to check out the Slow Wines. The Slow Wine designation is rather new but it features winemakers who produce ecologically sound wines.

Following lunch the after noon was dedicated to exploring the Grand Tasting. My strategy for this tasting was to only taste wines by producers I had never heard of before. Below are some of the wines that were fantastic! Even better was the fact that they will all be available in the Pacific Northwest later this year. Definitely put these on your list of wines to buy.

The Captivating Wines of Calabria was the title of the next seminar. Native grapes such as Gaglioppo, and Greco dominated this tasting. International varieties such as Cabernet, and Cabernet Franc are establishing more of a presence in Calabria. These wines were floral, fruit forward, earthy, and the tannins were manageable in such young wines.

The final event of the day was a dinner highlighting the food and wines of the Puglia region.

What better way to start my second day of Vino 2015 than with a seminar titled Italy Outsparkles the Competition-from Prosecco to Franciacorta and Beyond. Kevin Zraly was the only panel speaker so he decided to “turn the tables” and make the audience the panel. Kevin is such an enthusiastic presenter who just bubbles over with personality. He called on esteemed journalists in the audience such as Karen McNeil, Ed McCarthy, and Becky Sue Epstein to guide the discussion. It was a very entertaining hour tasting sparkling wines including Prosecco, Brachetto d’Acqui, Franciacorta, and others made from grapes such as Pinot Nero, Vernaccia, and Chardonnay.

Global + Local:Where does Italy Stand? This seminar showcased how cuisines, food products, wines and mixed drinks take their inspirations from where they are produced.  The timing of the next seminar  Italy’s Great Roses: La Dolce Vita al Rosato provided a refreshing outlook on rose wines. Italian roses range from dry to sweet, sparkling to fortified, and they are made from many different types of grapes. Can you say  “50 Shade of Rose” in your wineglass. Anthony Giglio moderated panelists Jessica Altieri, Marco Scapagnini, and Alessandra Rotondi.