It’s not very often that one has an opportunity to experience a tasting of several Pinot Noir from the same vintage by the same winery. I was fortunate to be able to taste 6 Pinots Noirs from Willamette Valley Vineyards in a seminar given by founder Jim Bernau at the Washington Athletic Club on March 10th, 2016.

First let’s start with a little information about the wine growing region. The state of Oregon is located on the West Coast of the United States. Oregon has 4 American Viticultural Areas (AVA) that are entirely within its borders and 3 other AVA that lie partly within Oregon. The Willamette Valley AVA is the largest AVA within the state encompassing a triangular region that measures approximately 100 miles long and 60 miles wide between the Cascade Mountains and the Coastal Range Mountains. The region was shaped at the end of the last Ice Age by the Missoula floods. There are several distinct soil types as a result of the floods including marine sedimentary soils, Loess, and Jory which is a soil of volcanic origin most common in the “red hills” of Dundee. Winds from the Pacific blow through the gap in the Coastal Mountains directly impact the region. The climate is generally cool and moist. Within the Willamette Valley Region there are 6 subordinate AVA which include Dundee Hills, Eola-Amity Hills, Ribbon  Ridge, Mcminnville, Yamhill-Carlton, and Chehalem Mountains. There are also 2 new AVA that have been proposed to the Willamette Valley and these include Tualatin Hills and Salem Hills. 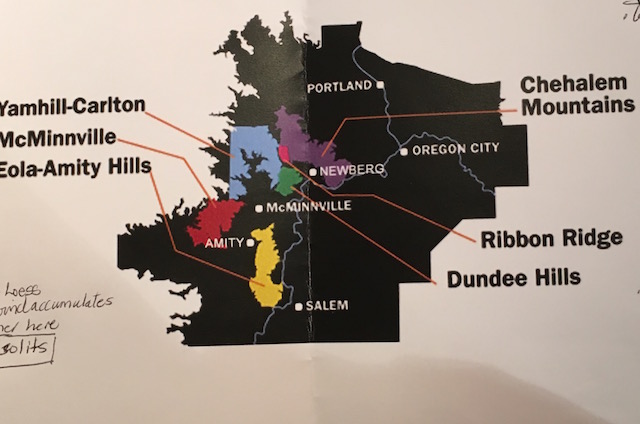 Jim Bernau is a pioneer of the Oregon Wine industry. In 1983 he came to the region and  purchased a piece of land that used to be a plum orchard. The orchard was covered in scotch broom and blackberry vines which Jim cleared with a 33 horsepower tractor. Jim planted Pinot Noir from the Dijon clones of Pommard and Wadensill clones. He eventually went on to expand his holdings and plantings to include Dijon clones 667 and 777, Pinot Gris, and Chardonnay 76 and 96 clones. Today Willamette Valley Vineyards is the third largest winery in Oregon by brand and production. Willamette Valley Vineyards was named Winery of the Year in 2011 by Wine and Spirits Magazine and their wines have received many accolades over the years.

The 2012 vintage in the Willamette Valley will go down as the greatest vintage known to the region. It was one of the driest years on record. A long summer and warm fall produced ideal conditions for the grapes to ripen perfectly. Wines for 2012 show beautiful flavors with structure and finesse. 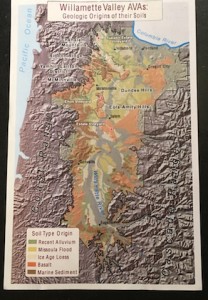 The tasting of Willamette Valley Vineyards wines proceeded in a north to south fashion. All of the wines were produced in a similar way, aged for between 10-12 months and used new French oak in the range of 10-35% . 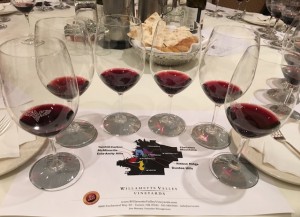 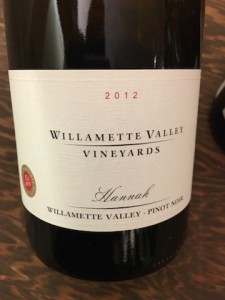 2012 Hannah Pinot Noir (Tualatin Hills -proposed AVA)
Tualatin Hills is the most northerly location but it is actually the warmest site of the 6 areas featured in the tasting today. Located at 500 feet elevation it is a warmer site due to the fact it is located in a cul-de-sac where the wind accumulates. The soil is comprised of a combination of Loess, and a soft marine composition. Also present in the soil are “musketballs” known as pisolits. The wine was very floral. Red fruit, pomegranate, and cherry aromas dominated with a slight earthy element noted. Aromas were mirrored on the palate. The fruit was ripe and the wine was balanced even with the 15% alcohol present. The finish was slightly chalky but pleasant. 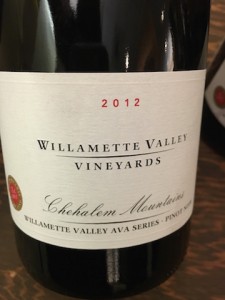 2012 Chehalem Mountains Pinot Noir
Fruit for the this wine comes from the Alloro vineyard which was formed from ancient basalt and Loess. The soil in this vineyard is a silty soil of ancient and decomposed volcanic sediment covered with a layer of ancient sediment and it’s called Laurelwood Series. The vineyard faces southwest. The wine was lighter in color than the first wine. Fresh red fruit including strawberry, cranberry, and raspberry were present on the nose along with a trace of licorice. Alcohol was 14.5%. This is a rich wine with bright acidity, balance, and finesse which manages to culminate in a juicy finish. 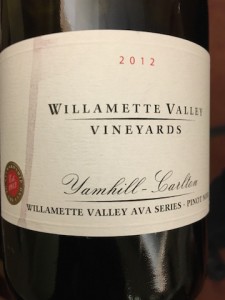 2012 Yamhill-Carlton Pinot Noir
Fruit for this wine comes from a warmer site. The vineyard sits on an old seabed. As a result of the seabed the soil does not return moisture so the vines are water stressed. Fruit here ripens quickly. The wine was a much darker color. Black fruits dominated the nose. Licorice, blackberry and brambleberry made up the core of the palate. Due to the increased ripeness the acidity in this wine was lower. Alcohol governed the palate. This is a wine that would appeal to wine drinkers that like fruity, higher alcohol Pinot Noir.

2012 McMinnville Pinot Noir
McMinnville has some of the oldest soils in the Willamette Valley. Here the soil is shallow and has a higher percentage of Jory which means higher iron content. This is a classic style of new world Pinot Noir. Black fruit dominated the nose. This highly structured wine had huge tannins but still managed to retain its elegance. Alcohol was 14.2%. One could definitely age this Pinot Noir for years. 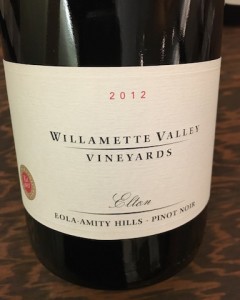 2012 Elton Pinot Noir (Eola-Amity)
This east facing vineyard is subjected to winds. White granite rock  from the Missoula floods is covered with Jory. Elton Pinot Noir was a deep garnet color. It was an extremely aromatic wine with layers of raspberry, spices, cherry cola, and earth. On the palate the minerality shone through. It was opulent but elegant, with silky fine tannins. So beautifully balanced with a never ending finish. Tonight this was my favorite. 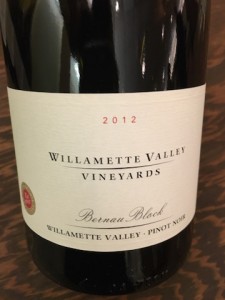 The Bernau Block is 15 acres planted from the very first plantings in 1983. The red volcanic soil here is called Nekia and there is also Jory soil present. Although this is the southernmost site of the wines presented today , it is the coolest site. The 2012 crop had high lignification levels which meant more whole clusters could be used. The nose was spicy with ripe red and black fruit aromas, anise, cedar, and tobacco. Aromas were mirrored on the palate. The wine had been aged 10 months in 35% new French oak. This resulted in a full bodied, well structured wine with polished tannins, velvet texture, and an incredibly long finish. Alcohol was 13.9% . An absolutely gorgeous Pinot Noir which could stand up to many styles of food and meat dishes. 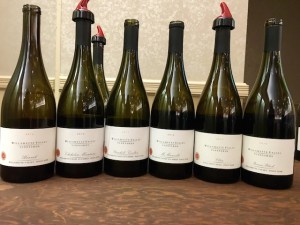 The presentation by Jim Bernau was an excellent opportunity to experience Pinot Noir from different vineyard sites in the same vintage made by the same producer. Delving into the geographical aspects and the terroir of the region really highlighted how the Pinot Noir grape expresses itself in the wines. 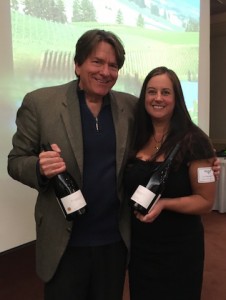